The History of Mr Polly

Screenplay by Alan Hodges, from a novel by HG Wells 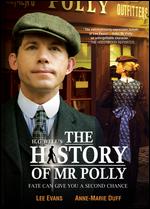 Having made a film with another comedian, Steve Martin, I was curious to work with Lee. I really warmed to him from the start and had a lot of fun working with him. The one recurring theme would be trying to get him to stay with, but develop a performance from one take to another. All his instincts told him to give the camera something new each time it turned over. We spoke about this and he explained that he was trained to sit in a room with some other comedians and throw lines at each other, always something original and new.

I have a tremendous admiration for actors like Lee and Steve when they enter into the comic zone and are so assured, versatile and transcendent. But I recall Lee saying one Monday-

“You know how it is, you go back to your hotel room and walk about, running scenes over and over in your head, wondering how you could have done it better?”

And I really don’t do that. When it’s done, it’s done. Maybe whatever mistakes we made might help with shooting future scenes but, otherwise, it’s over. I could see Lee, the performer, dealt with it differently. I wondered if he ever switched off-  clowning around for the crew in between takes, an endless performance. But what a nice and sympathetic man and I was pleased with his take on the character Mr. Polly.

A special pleasure was working with the wonderful Anne Marie Duff. What an instinctive, disciplined and truthful actor.

I have several times made films adapted from books. Perhaps the script for THE HISTORY OF MR. POLLY was rather too literal an adaptation to allow the narrative to breathe and expand. I generally feel that the best adaptations assert their own identity and don’t try to be a visual illustration of a literary work. Some of my favourites are THE UNBEARABLE LIGHTNESS OF BEING, the 1930 version of ALL QUIET ON THE WESTERN FRONT and CATCH 22, which succeed in redefining the story with a strong cinematic identity.