Conquest of the South Pole 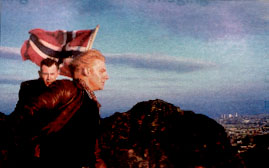 My first feature was CONQUEST OF THE SOUTH POLE for Gareth Wardell’s Jam Jar Films, from a play by the German writer, Manfred Karge. It was an eccentric proposition, dense in dialogue, about unemployed teenagers in Edinburgh who go on a symbolic journey to the South Pole, a trek through cafes and over city walls, which finally tears the group apart, though they never leave Edinburgh. It had an early appearance by Ewen Bremner, playing Penguin, forecasting his later role in TRAINSPOTTING. Karin Bamborough visited the cutting room and bought it for Channel 4, which saved my bacon. I will be forever grateful.