Writers Shane Connaughton and Kerry Crabbe had both been writing tutors at film school and they fought to persuade the Sam Goldwyn Company to let me direct their film, THE PLAYBOYS. In the end they succeeded and we went to Ireland to tell the story of a group of travelling actors in the 1950s, performing Shakespeare and Irish classics from one village to the next. 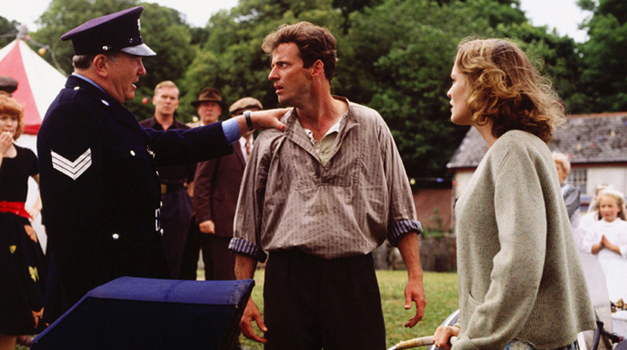 Albert Finney was an alcoholic policeman on the wagon. Robin Wright Penn and Aidan Quinn were the love story. I had a lot of respect for Robin, an actress who really thought through what she wanted to do and was uncomfortable with more than three takes. Aidan was great as the young Irish Romeo, a genuinely nice man, unspoiled by stardom. 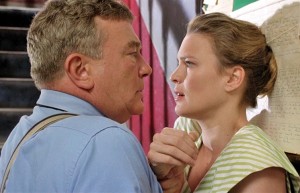 Albert Finney is a true gentleman. Before we started he took me to one side and offered some advice. I thanked him. He said “That’s okay. It’s your first feature film and you need all the help you can get.” And he meant it, it was a generous gesture. Albert had the amazing ability to memorise the names of the whole crew and all the local villagers. This ability to treat everyone with respect and consideration earned him great affection. One Sunday he hired a coach and took the whole crew to the races. I slept through that event unfortunately. Our night off on the borders of Ireland usually sparked off a party which lasted until dawn.

When we wrapped, Albert Finney was arrested by Shaun, the local policeman. He was arrested for impersonating a policeman and for drinking on duty. The joke ran all the way to the prison cells, where Albert finally put his foot down and demanded an unconditional release. Sometimes it works to have the writer on set, other times it can cause problems. In this case it was essential. The page count was bigger than the schedule and, many nights, Shane, Kerry and I sat down around midnight working out where we could make cuts on the next day’s schedule. It was like amputation for them, but they didn’t complain. We were like the Three Musketeers.

I found that nobody liked this film better than Hollywood producers and the next year of my life was spent commuting to LA on several developments, none of which happened in the end. But that year was a long learning curve.

Extract from a Chicago Tribune interview with Robin Wright, 1992

Wright said the chance to work with Albert Finney was “another big part of why I wanted to do ‘The Playboys’ and I wasn’t disappointed. He was a completely different energy to work with because he has the kind of professionalism that our generation hasn’t been exposed to-meaning the whole English theatre background. He was the other end of the spectrum from working with Aidan, who’s very American and very internal. Albert is a character study all the way”.

The actress had similar high praise for Scottish director Gillies Mackinnon and his approach to filmmaking. “We had a relationship like brother and sister, where we could fight about a scene and finally compromise. Not that I fight a lot with my directors…”, she said with a laugh. “It was more the dynamic between us and I had so much fire in me, not having made a film for two years, that I was ready to do anything to create the character”.

For Wright this included wanting to dye her hair red and the addition of blue contact lenses, “to complement my real freckles. But they said: No, it’s too obvious. They were really afraid because they’d cast me for my looks and they wanted me to keep my hair the way it was, the same color and length, but I felt I looked like a Malibu beach bunny, not an Irish country girl from the 50s”.

Despite such minor misgivings, Wright, who said her own ancestry is “mainly English and Scottish”, feels pleased with her performance and the film. “I’m usually very self-critical, but I don’t mind watching myself in ‘The Playboys’, and it was a lot of fun to make”, she says. “We all got to know each other pretty well, but then we didn’t have a choice. We shot the movie on location in this little village near the border of Northern Ireland, and we were all stuck there for three months, in the middle of nowhere, and we all ate together and hung out. It was almost like being the playboys in the film”.