I was sitting in my garden with Billy, my brother, talking about the extraordinary years in the ’60s when Glasgow life was ruptured by rival gangs. At the time of the hippies and the Paris riots, armed gangs like the Cumbie, the Tongs and the Fleet were meeting in teams of hundreds to fight it out.

We decided to make a film about three brothers, one about to go to art school, one lost in a violent world and the youngest caught between the two. Billy’s tonal reference was MY LIFE AS A DOG. Mine was ROCCO AND HIS BROTHERS. We raised a budget of £1.2m, with a thirty day shoot and then hired all the best young actors in Glasgow, many of whom had never been in front of a camera.

I loved this cast. It was truly like a big family and these young actors were ready to do anything for the film. Laura Frazer was studying drama in Glasgow at that time. A year later she was in Hollywood making a film with lsabella Rossellini. 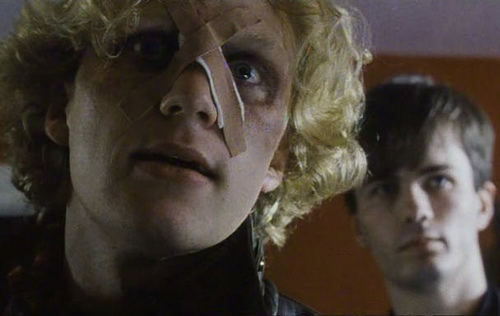 It is always hard to find a young actor for the central role, but we were lucky with lain Robertson, aged fourteen at the time… perfect. The character of Lex had to draw a gangland map with cartoon gang members and I couldn’t find anyone able to do this. Then I remembered that, back in my London, my own daughter, Carla, aged fourteen then, was a good cartoonist. I showed her the film and she drew the caricatures for the map. We paid her £60 – a fortune.

Small Faces won The Michael Powell Award at Edinburgh and the Jury Prize at Rotterdam.