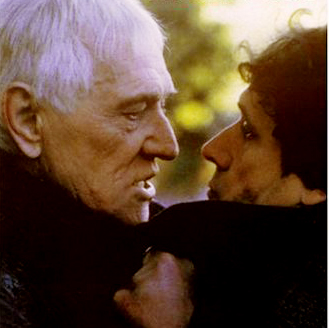 The excellent producer Emma Burge invited me to direct TROJAN EDDIE, written by Billy Roche. It was a beautiful screenplay, sad and poetical. Originally set in his home town Wexford, we had to relocate to Dublin in accordance with the budget. The cast was wonderful -the Irish have great actors. Stephen Rea played perfectly opposite Richard Harris.

I had heard a lot of ominous things about Richard and, though he was always up to mischief and we did have a couple of head-on confrontations (which I quite enjoyed), I liked him immensely and I love his performance as John Power, the Tinker King. Stephen’s character works for him and is under his thumb. The question is – will he ever get free and get the better of him in the end?

One night we shot the scene where John Power (Richard), realising that his young bride has run off with a young tinker on their wedding night, sends his men out to hunt them down. He steps onto the balcony and then (what the hell is he up to???) he melodramatically throws her wedding dress across the railing. Behind me I heard Stephen Rea’s northern Irish voice quip -”This film’s turnin’ into Snow White and the Seven Dwarves!” I took off my headphones and walked up to Richard and said -”Richard, that was very interesting, but…” he cut in – “Try it the other way, yeh?”

Another night I wanted to shoot a bar scene in one long take. Richard took a lot of time getting ready as it was a mass of dialogue to memorise, ending in him swinging a deliberately missed punch at Stephen. We finally went for it. He swung the punch so suddenly and it missed Stephen’s chin by a hair. I could see the startlement in Stephen’s eyes because, if that punch had connected, it would have knocked him out. I went to Richard and said – “Great, we don’t need a second take, that was great, Richard”. He leant across the bar and replied “Yeh, it was a fuckin’ miracle”.

I wish more people had seen this movie. Many people have said to me that it was Richard’s best performance in years. I was very touched when the then young director, Shane Meadows, chose it on Film Four as one of his two favourite films.